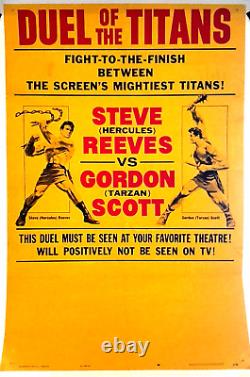 Original First Year of Release 1963 One Sheet USA poster (27 inches x 41 inches) on Linen Backing, used for advertising purposes in movie theaters in America. Nicely backed in GOOD+ to VERY GOOD condition. Linen border is about one and a half to two inches outside the actual paper edge.

- Twin brothers revolt against tyranny in pre-Roman Italy and then come to a parting of the ways as they lead their people toward the founding of a new city. Twin half-mortal boys are placed in a basket and abandoned in a river.

A she-wolf rescues and nurtures them until they are recovered by a shepherd, who brings the two boys up as his own. Twenty years later in 733 BC, Romulus and Remus now lead a band of theives against the two tyranical kings of the Sabines. When they meet their mother just before she dies, she tells them that they are destined to be the founders of a great city, called Rome. This item is in the category "Entertainment Memorabilia\Movie Memorabilia\Posters\Originals-United States\1960-69". The seller is "hardtofindrare" and is located in this country: US.