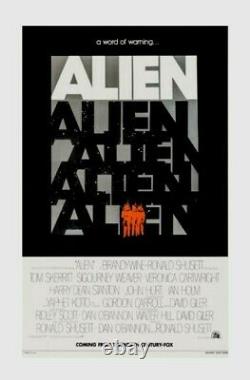 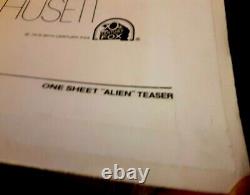 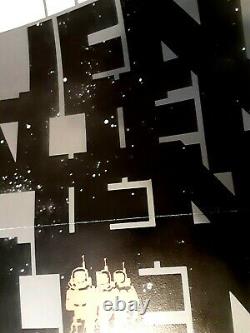 Original 1979 USA One Sheet (27x41) TEASER ADVANCE movie poster on Linen Backing. This original theater used poster was sent to cinemas for advertising purposes, months or weeks ahead of the scheduled premiere in order to build audience anticipation.

This type of theater poster is more scarce than regular advertisement one sheet posters for a particular film. Natural fold wear with very few visible pin holes. The poster border appears to have been professionally restored, prior to paper's linen backing. Bright colors and exciting classic sci-fi imagery.

Linen Border is about one and one half inch outside the actual restored paper border edge. Cast : Sigourney Weaver, Tom Skerritt, Yaphet Kotto, Veronica Cartwright, John Hurt, Harry Dean Stanton, Ian Holm. TAGLINE : In Space, NO ONE Can Hear You SCREAM! PLOT SUMMARY : After a space merchant vessel receives an unknown transmission as a distress call, one of the crew is attacked by a mysterious life form and they soon realize that its life cycle has merely begun.

The crew are under obligation to investigate and the spaceship descends on the moon afterwards. After a rough landing, three crew members leave the spaceship to explore the area on the moon.

When one of the eggs is disturbed, the crew realizes that they are not alone on the spaceship and they must deal with the consequences. Won Academy Award OSCAR for Best Visual Effects. BEHIND THE SCENES TRIVIA : To get Jones the cat to react fearfully to the descending Alien, a German Shepherd was placed in front of him with a screen between the two, so the cat wouldn't see it at first. The screen was then suddenly removed to make Jones stop advancing and start hissing. The first day that she shot a scene involving Jones the cat, Sigourney Weaver's skin started reacting badly. Horrified, the young actress immediately thought that she might be allergic to cats, and that it would be easier for the production to re-cast her, instead of trying to find four more identical cats. As it transpired, Weaver was reacting to glycerin sprayed on her skin to make her look hot and sweaty. Ridley Scott stated that in casting the role of Ripley, it ultimately came down to Sigourney Weaver and Meryl Streep. The two actresses had been college mates at Yale. Ultimately, Weaver was offered the job because Streep was mourning the death of her partner John Cazale at the time of casting.

Harrison Ford turned down the role of Captain Dallas. As of this writing Meryl Streep and Harrison Ford have never appeared together in the same film, ever. This item is in the category "Entertainment Memorabilia\Movie Memorabilia\Posters\Originals-United States\1970-79". The seller is "hardtofindrare" and is located in this country: US.