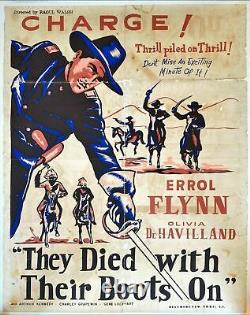 Pictures, produced by Hal B. Wallis and Robert Fellows, directed by Raoul Walsh, that stars Errol Flynn and Olivia de Havilland. A highly fictionalized account of the life of George Armstrong Custer from his arrival at West Point in 1857 to his death at the battle of the Little Big Horn in 1876. "Linenbacking" is a process that is used to preserve movie posters (the best restorers de-acidify the poster during the restoration process), and to make them far easier to display (it is much easier and less expensive to frame a linenbacked poster). When linenbacking is done correctly, it adds to the value of the poster.

This item is in the category "Entertainment Memorabilia\Movie Memorabilia\Posters\Originals-United States\1940-49". The seller is "moviepostercollectors" and is located in this country: US. This item can be shipped to United States.