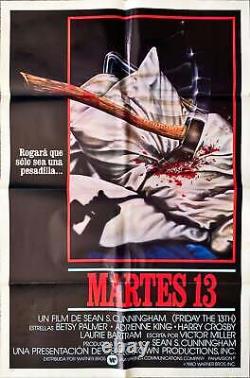 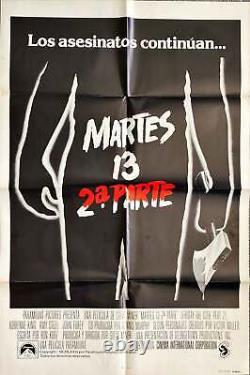 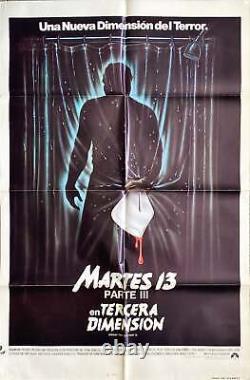 And on Friday the 13th, nothing will save them. "; "A 24 hour nightmare of terror. "; "You'll wish it were only a nightmare... Starring Betsy Palmer, Adrienne King, Harry Crosby, Laurie Bartram, Mark Nelson, Jeannine Taylor, Robbi Morgan, Kevin Bacon (in his fourth credited movie role), and Ari Lehman (as Jason Voorhees).

" starring Dana Kimmell, Paul Kratka, Richard Brooker ("as Jason), Tracie Savage, and Jeffrey Rogers. These are rare Spanish language (probably Central American) versions of the first 3 Friday the 13th movies. We know for a fact that they are not the Argentinean, Mexican, or Spanish (Spain) versions of the movie. This item is in the category "Entertainment Memorabilia\Movie Memorabilia\Posters\Originals-United States\1980-89". The seller is "moviepostercollectors" and is located in this country: US.

This item can be shipped worldwide.