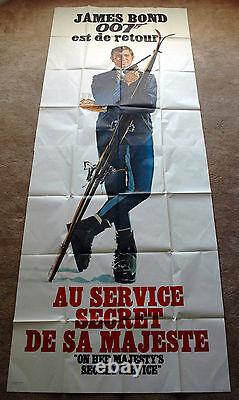 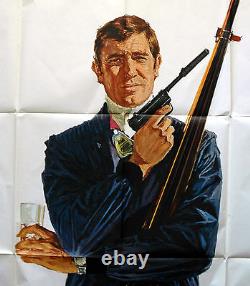 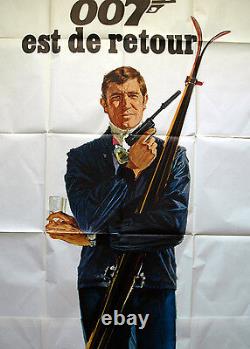 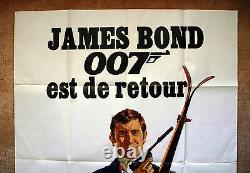 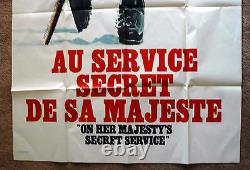 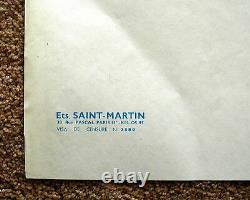 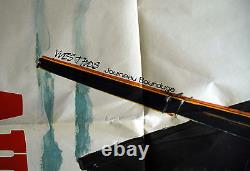 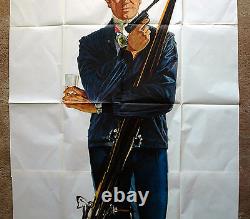 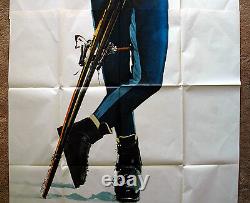 This is a Vintage Original 1969 - JAMES BOND 007. On Her Majesty's Secret Service. French 1st Release Movie Poster - starring George Lazenby - It is not a reprint or reproduction. Measures 47 x 123 1/2 inches. Poster is in excellent condition!

Colors are crisp and bright. Edges are corners are sharp. Minor fold wear with a couple tiny tears in fold creases and some wrinkling (which should straighten out nicely when framed).

No tape or pin holes (please see photos). Folded two-piece as originally issued. It would be difficult to find another in this good of condition. This is a large huge!

, colorful poster with an iconic image of James Bond! On Her Majesty's Secret Service (1969) is the sixth spy film in the James Bond series, based on the 1963 novel of the same name by Ian Fleming. Following Sean Connery's decision to retire from the role after You Only Live Twice, Eon Productions selected an unknown actor and model, George Lazenby, to play the part of James Bond. During the making of the film, Lazenby decided that he would play the role of Bond only once. In the film Bond faces Blofeld (Telly Savalas), who is planning to sterilise the world's food supply through a group of brainwashed "angels of death", unless his demands are met for an international amnesty for his previous crimes, recognition of his title as the Count De Bleuchamp (the French form of Blofeld), and to be allowed to retire into private life.

Along the way Bond meets, falls in love with, and eventually marries Contessa Teresa di Vicenzo (Diana Rigg). This is the only Bond film to be directed by Peter R.

Hunt, who had served as a film editor and second unit director on previous films in the series. Hunt, along with producers Albert R. Broccoli and Harry Saltzman, decided to produce a more realistic film that would follow the novel closely. It was shot in Switzerland, England, and Portugal from October 1968 to May 1969. Although its cinema release was not as lucrative as its predecessor You Only Live Twice, On Her Majesty's Secret Service was still one of the top performing films of the year. Critical reviews upon release were mixed, but the film's reputation has improved over time, although reviews of Lazenby's performance continue to vary. This item is in the category "Entertainment Memorabilia\Movie Memorabilia\Posters\Originals-International\1960-69". The seller is "fscozzari" and is located in this country: US. This item can be shipped worldwide.