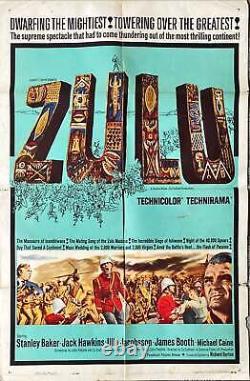 The supreme spectacle that had to come thundering out of the most thrilling continent! "; "These are the days and nights of fury and honor and courage and cowardice that an entire century of empire-making and film-making can never surpass! The Mating Song of the Zulu Maidens! The Incredible Siege of Ishiwane!

Night of the 40,000 Spears! Day That Saved A Continent! Mass Wedding of the 2,000 Warriors and 2,000 Virgins! This item is in the category "Entertainment Memorabilia\Movie Memorabilia\Posters\Originals-United States\1960-69". The seller is "moviepostercollectors" and is located in this country: US.

This item can be shipped worldwide.